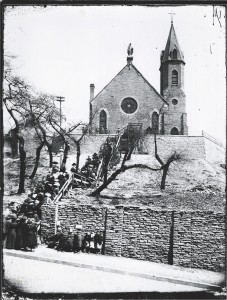 ARCHBISHIOP PURCELL, inspired with the vision of the “Shrine to the Virgin-Cresting a Picturesque Hill,” founded on Mt. Adams the Church of the Immaculate Conception, He laid the Corner Stone on August 21, 1859, and in December, 1860, dedicated the shrine as the Parish Church of this area. The term, “Immaculata,” was originated by the good Archbishop, and is used even today. The Archbishop received the Passionist Fathers into his See City in 1871, and assigned to them the growing Parish. The Fathers, in the meantime, founded Holy Cross Retreat and Parish on Observatory Hill nearby. On August 22, 1909, after half a century, Immaculata was solemnly consecrated by Archbishop Moeller. While the Church was closed during 1953, and undergoing timely repairs, Archbishop Alter declared it a Special Marian Shrine for the Marian Year of December 8, 1953-54. Immaculata Church is a major landmark over looking the Ohio River.

FOR OVER A CENTURY, year after year on Good Friday, thousands of Pilgrims of various faiths have been praying “The Steps” of Mt. Adams to Immaculata Church. How did this unique devotion begin? It goes back to the saintly Archbishop Purcell, who with great fervor urged the faithful of Cincinnati to pray for his Grand Venture – a Shrine to the Holy Virgin – on the most prominent spot in the City. In response to his kind requests, there began a daily trading of praying people up the mud and rocks, seen while the foundation was being dug. This evident sign of faith helped to bring about the building of wooden steps in 1859, from the street below to the entrance of the Church. The City built concrete steps in 1911, which in 1958 [and 2009] were replaced by a more convenient structure. The placing of the large Crucifix near the Church entrance, influenced more and more people to concentrate on Good Friday as “The Day” for “Praying the Steps.” The “Good Friday Steps” are a symbol of hope to millions of devout souls.   Published -1960’s-